Kadikoy can be considered as one of the oldest and most ancient districts of Istanbul. Archaeological research in Turkey have shown that the area is more than 7,000 years old. Despite being several thousand years old, it is now one of the most modern and popular and of course one of the most luxurious areas in the vast city. Not only is it a popular neighborhood among Turks, but it has also become one of the most popular immigration destinations in recent years.

If you are looking to buy a house in Istanbul, we have always said that you should know the neighborhoods of the city well and after that, proceed with sufficient knowledge and information to buy. Because Istanbul is a vast city and it has its own unique features at each corner.

In the article in “Istanbul Hamrah”, we intend to introduce the Kadikoy district of Istanbul in a complete and comprehensive way, discuss about its background and facilities, determine its geographical location and finally mention the price of a house in the district.

The Kadikoy district is located in the southernmost Asian part of Istanbul and has the longest coastline (about 21 km) with the Sea of ​​Marmara. Kadikoy is located on the east side, next to the big neighborhood of Maltepe, and on the north side, it is adjacent to the two neighborhoods of uskudar and Ataşehir. 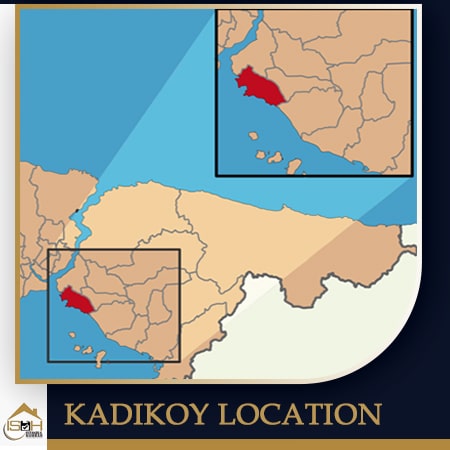 The distance from Kadikoy district to the important areas of Istanbul is as follows:

It is worth mentioning that the district is one of the coolest and airiest areas of Istanbul and has a balanced and pleasant temperature all year round. In summer, the average temperature in the region is about 19 degrees Celsius and in winter it is about 10 degrees. The average rainfall, according to Kadikoy Municipality, is about 700 mm.

Take a look at the history of the Kadikoy district

Istanbul, as the best city to buy property in Turkey, is thousands of years old, but the history of Kadikoy district is even older than the city of Istanbul itself. Archaeologists estimate the founding of the Kadikoy district to be between 5500 and 3500 BC. The peak of this city was in 685 BC and at that time, it was known as “Chalcedon”.

The city was handed over to the Persians, Greeks, Byzantines, Romans, Arabs and even the Crusaders for centuries, and finally fell to the Ottoman sultans in the 14th century.
Since then, the Chalcedon district has become a residence for Istanbul judges, which is why it is called Kadikoy (Judge Neighborhood).

The Kadikoy district was part of the uskudar district until 1928, but since then, with the reforms made by the district municipality, the district has become a separate ilche. Areas such as Bostanci and Suadiye also seceded from the Kartal neighborhood and were annexed to this neighborhood, eventually forming what is now Kadikoy.

Kadikoy district in the present era

Kadikoy district currently covers an area of ​​about 41 square kilometers and has a population of about 500,000 at the last census. With a cursory glance, one can see that the population density in the area is high and it is very crowded compared to other neighborhoods of Asian Istanbul, which are mostly uncrowded; but you can still find secluded and quiet areas.

Today’s Kadikoy district is full of narrow, nested streets, like the ones you see in Turkish TV series. It is full of cafes, restaurants and clubs that are open until morning. If you are looking for a lively nightlife, Kadikoy can be a great destination for you.

Kadikoy district is not only one of the busiest commercial hubs of the city today, but in recent years it has also become a popular destination for buying property in Turkey. Buying a property in the area, given its features and amenities, can be a lucrative investment. 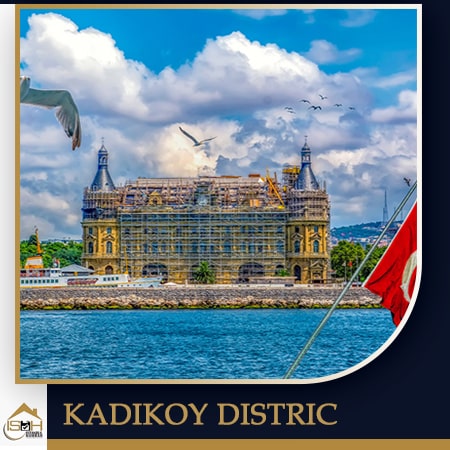 Features and amenities of Kadikoy district

In terms of amenities, Kadikoy district can be considered one of the richest areas in Istanbul. These amenities will undoubtedly make life in Turkey doubly easy for you and, of course, will also affect the value of your property. Access to the Kadikoy area is greatly easy and thanks to the extensive transportation system, commute will be done with minimal effort. Numerous educational, medical and recreational centers are also among the strong points of the neighborhood.

Perhaps the biggest strength of Istanbul’s Kadikoy district is its public transportation system. The area has about 20 bus lines, and the M4 Istanbul Metro line, the T3 tram line and 7 sea lines that have made travel as easy as possible.

The second strong point of the Kadikoy district of Istanbul in our opinion is its numerous shopping malls and countless markets. The streets of the district are full of big and small shops, boutiques that you can find everything you want.  Some of the top shopping malls in Turkey, including several branches of AVM chain shopping center, Akasya shopping center, etc., are located in the same area.

Buying and renting a property in Kadikoy district

By buying a property in the Kadikoy district of Istanbul, you can easily get a Turkish passport. As mentioned in the previous sections, Kadikoy is one of the central districts of Istanbul and is really rich in terms of amenities, so the value of the property is greatly high. In terms of house prices, the district can be considered as one of the above-average to high-priced areas.

Istanbul Hamrah, as a home buying site in Istanbul, has gathered first-hand information about house prices in the area.

The purchase price of the property in Kadikoy Istanbul in the first half of the 2022 is as follows:

The rental price of the property in Kadikoy in the first half of 2022, is as follows:

In which part of Istanbul is Kadikoy district located?

It is located in the southernmost Asian part of Istanbul and is adjacent to the neighborhoods of uskudar, Maltepe and Ataşehir.

What are the most important features of Kadikoy district?

First of all, its strong transportation system can be mentioned, and then we must mention the feature of nightlife in the area.

What is the property price in Kadikoy district?

Ask your questions in the comments section
1/5 - (3 votes)